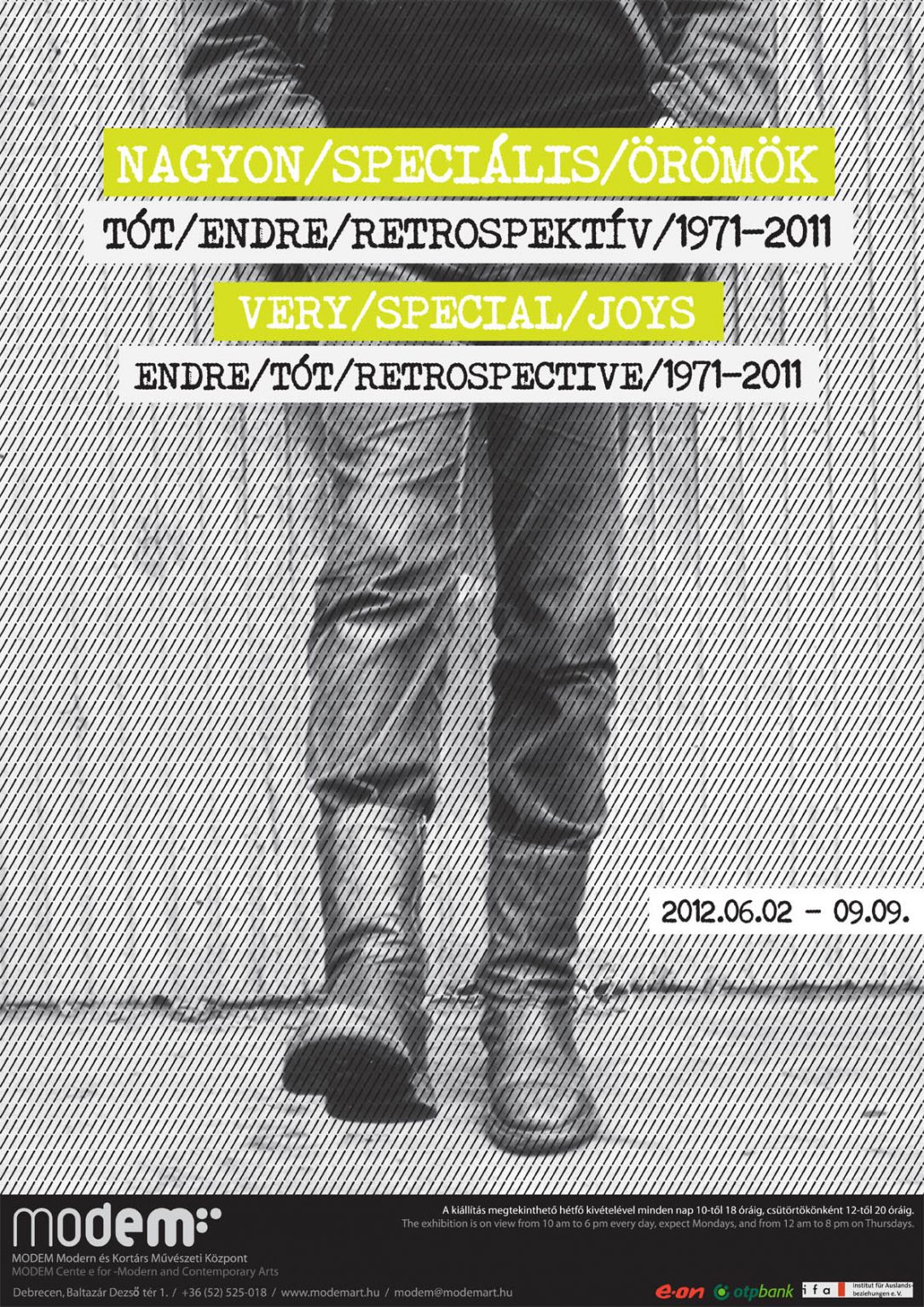 “I am glad that I could print this sentence.”
The starting point of this exhibition is one of the first Joys of Hungarian artist Endre Tót (*1937 in Sümeg, Hungary), the happiness engendered by the illegal (i.e., not approved by the communist state) printing of a small cardboard sheet in 1971. That same year, Tót quit his gestural painting practice and started dealing with conceptual art by realizing his immaterial artistic ideas using the tools of linguistic irony and aesthetic minimalism.

Up until today, Tót’s work is connected to the attitude of Fluxus by its utilization of new, non-art media, its apparent simplicity, and absurd humor, particularly the persistent repetition of the sentence “I’m glad if…” used in different contexts. Given the circumstances – within the confines of socialist Hungary, Tót was severed from new artistic developments in the West and was repelled by the ideologically dictated understanding of art in his own country – the artist was literally facing emptiness or nothingness. His later work is an attempt at grasping this void and portraying this nothingness (“semmi” in Hungarian and “nix” in German) in various conceptual and pictorial ways. Besides the Joys, in the early 1970s, Tót developed the basic concepts that were to henceforth determine his œuvre. Text, image and symbol interact in the group of works entitled Rains, created through the playful usage of the forward slash key of the typewriter. The Zer0 pieces place the digit 0 into an aesthetic context. The artist’s book My Unpainted Canvasses (1970), a virtual presentation of paintings he never actually created, is a direct antecedent of his Blackout and Absent motives.

An emblematic figure of the Hungarian Neo-Avant-Garde, Tót consciously sought to join progressive art movements behind the “Iron Curtain” with his paper-based new works and artist’s books. Solely through the channels of Mail Art, he managed to gain an international reputation and was able to participate in exhibitions abroad, avoiding censorship in Hungary. With the help of the prestigious DAAD scholarship, in 1978, he relocated to West-Berlin and later settled later in Cologne. After having left his native Budapest, Endre Tót realized performative public actions in several European cities, including demonstrations where participants carried banners written in zer0 codes and therefore not suitable for communication (Zer0 demo) and actions where Tót informed passers-by about his banal joys through distributing flyers, holding text-boards in his hand, or using electronic advertisement boards (TÓTalJOYS).
In the late 1980s, Tót found a way back to working with a paintbrush, although the works in the series Unpainted paintings are only formally paintings; their essence is rather the visual continuation of Tót’s conceptual art. The invisible/non-apparent motives of the series make the viewer recall iconic images from art history and contemporary history (“Zeitgeschichte”). From this period onwards, Endre Tót’s art has found its way to international museums and enjoyed institutional success worldwide.

Very Special Joys at Modem in 2012 was the first large-scale exhibition in Hungary focusing exclusively on Tót’s conceptual work. For this exhibition, I was able to complete the early conceptual material with previously unseen works directly from his studio in Cologne.
Tensions stand in the center of Endre Tót’s retrospective: while attempting to drastically erase all individual handmarks from his art, he substitutes them with the constant verbal and visual presence of his ego, yet at the same time, the motive of absence is elevated to the level of an artistic program in his works. The art of Endre Tót questions the institutional systems of political power, everyday communication, and artistic canons in an ironic and seemingly light way. This exhibition demonstrates a particular Avant-garde perspective on current art trends.

On the occasion of the exhibition in Modem, I initiated to realize Endre Tót’s first ever public demonstration in Hungary with local participants in Debrecen. The Zer0-demo was greeted with enthusiasm by the younger generation of artists, who initiated further Zer0 and Gladness demonstrations in Budapest in 2013 and 2017.