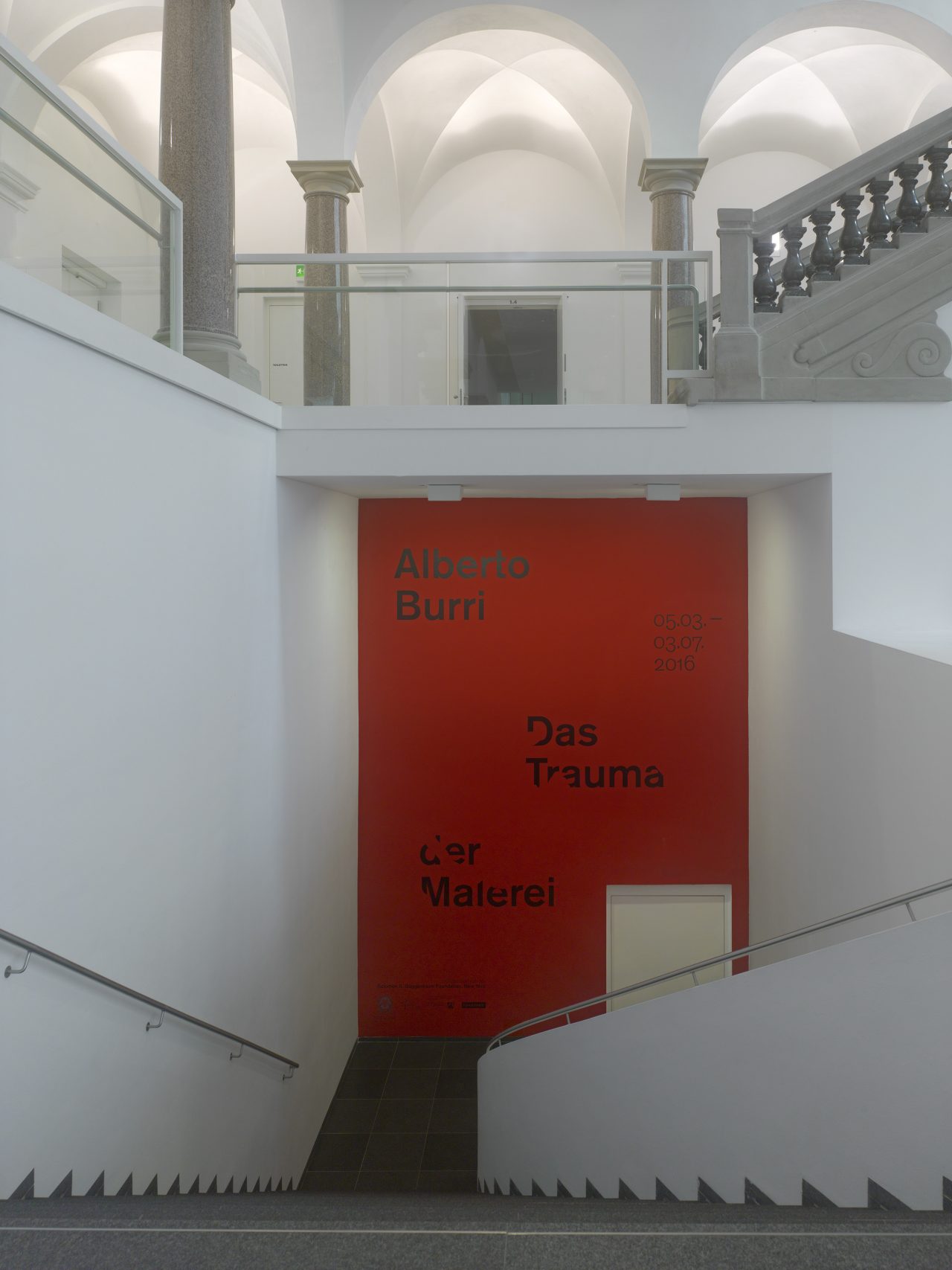 With his material- and process-based paintings, Italian artist Alberto Burri (1915-1995) was a central figure of postwar art. The retrospective “Alberto Burri. The Trauma of Painting”, which was organised in cooperation with the Solomon R. Guggenheim Foundation in New York, pays tribute to his work on the occasion of the artist’s centenary. Alberto Burri’s œuvre offers an essential commentary on the physical and psychological traumas of World War II and its aftermath.

Born in the town Cittá di Castello, Umbira, Burro grew up in the region of renowned Renaissance art. His background in medicine, practice as a soldier and military doctor in World War II, experience of making do with little as a prisoner of war, and the lack of formal artistic training – but deep familiarity with painting traditions – all contributed to his distinctive approach. From the late 1940s, he used humble, non-art and prefabricated materials in unprecedented ways, including tearing, stitching, welding, melting and burning to create his “unpainted paintings.”

The exhibition in the basement of K21, which is the first major display of Burri’s work in Germany in almost 20 years, unfolds in roughly chronological order. It follows the artist’s ten major series, each named after the respective materials, colors or processes used. The development of these series sometimes overlaps, and themes reoccur within his work: the merging of painting and sculptural relief, the artistic re-purposing of industrial products and the precarious balance between disintegration and cohesion.

At the same time, Burri”s use of material reflects the economic situation in Italy in the second part of the 20th century. In the immediate postwar years his employment of tar, ground pumice stone, and cast-off linens and burlap sacks tells of the scarcity of materials at that time. During the European economic boom of the following decades, the turned to wood veneer, cold-rolled steel, and plastic sheeting straight from the factory.

Buri pioneered his new art of assemblage at the time when gestural painting prevailed in European an US American art. In his material realism, painting’s ground and support were deconstructed, destroyed and finally restored. Burri’s painting had a strong influence on subsequent artistic movements, including Neo-Dada, Process Art and Arte Povera. On the second level of K21, a collateral exhibition is devoted to the material-based artworks from the collection of the Kunstsammlung Nordrhein-Westfalen. In the “Studiolo Burri,” an open workshop accompanying the exhibition, visitors were invited to create artworks inspired by Burri, in the close proximity to the originals.